Editor’s Note:  This is BGD’s first opinion/advocacy blog post.  It reflects the personal opinions of the author. No affiliated organizations were made aware of the content and are not responsible or presumed to be in agreement with these opinions.  It also does not necessarily reflect the views of BGD or those of its steering committee. 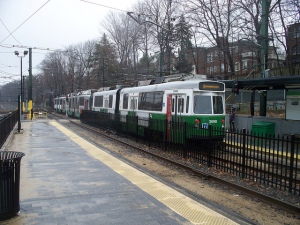 Photo Courtesy of Massachusetts Department of Transportation on Flickr.

The MBTA has announced a third option for next years service starting on July 1st where fares will by raised by 25% and the elimination of services will be a fraction of the original Scenario 1 and 2 proposals (click here for the Powerpoint Presentation). If you are part of the 6,000+ individuals who attended public hearings, don’t break out the champagne yet. For those of you who did not participate, don’t worry you’ve only missed the first quarter of the game. You see the MBTA annual budget is forecasted to be in deficit for the next four years, and the solutions for this year are band aids at best.

Like most citizens, I had originally thought that this budget problem was largely the result of the Big Dig – central artery highway project – debt being unfairly dropped onto the MBTA. However, while the debt payments are significant that’s only part of the structural issues. Furthermore, the MBTA’s general manager stated that the debt is appropriate because there was a gain of some licensing powers that could generate income. Also like most citizens, I didn’t fully appreciate the framework in place for funding the MBTA. For example, communities with public transportation provide payments to the state which is based on population and adjustments for social – economic factors. This is in addition to the fares and other income sources such as monies from other state taxes and selling ad space on MBTA rider vehicles.

This is a great example of why having business experience doesn’t necessarily help aspiring government leaders. If this was a product line for a business, we’d take the revenue from the bus route minus expenses and that number would represent a positive or negative number. What business calls a profit or loss but in government it’s called a budget surplus or loss. The government doesn’t have the concept of tying the cash flow in and out for an individual government service as a means of assessing its financial viability.

So what, surely they have an objective way of prioritizing service based on use and financial viability? I certainly couldn’t find any evidence of it. While the subsidy rates were published, I found 2 buses with the same subsidy rate where one had no change to service while another was suggested for complete elimination. The MBTA also stated that an area with multiple service options would receive greater cuts than those areas with a sole option. Again evidence to the contrary, as riders spoke at public hearings to raise the concern about being house bond because there was no second option. Some citizens stated the cuts being made meant buying a car which was not possible either financially or handicaps that prevented them driving.

In addition to lack of transparency, the finger pointing game was in full evidence during this process. I sent the Governor a letter with policy suggestions – not a word of user impact. The standard reply letter dutifully arrived to state that he understands the T is about people not money and that he made proposals but the legislators voted against these. The Governor failed to mention that he commissioned an independent review in 2009 that predicted such financial straights. Furthermore, the solutions for this year are short term by raiding the cookie jars – monies from the snow removal and the Department of Registry of Motor Vehicles for example.  Naturally, there was no mention by the Governor that the same budget deficit was projected to happen for the next 3 years.

That brings us to the future. Riders were clear on their personal impacts and concern for smart growth. Should the Governor get points for the Green Communities Act (requires qualified municipals to cut energy consumption at least 20%) if citizens increase car miles related to service cuts and reduce the environmental benefits? Neither the riders nor the state have articulated a clear regional and long term vision for public transit. What exactly would it take for the governor, legislators and MBTA management to come up with a long term plan to make the system slogan “Best in the country” true? Community input and pressure is going to be necessary to effect long term changes. I am positive that green advocacy is going to be necessary to accomplish these goals. Therefore, I was surprised that the sustainability community was absent from the debate– no comment on either the ICLEI (International Council for Local Environmental Initiatives) or MCAN (Massachusetts Climate Action Network) websites.

Here’s the good news, this is a great opportunity for sustainability professionals to show case our value statement. The social impacts will be made clear by the general public and the environmental impacts by the natural conservation groups. Businesses also have a stake in the MBTA service in terms of their employees being able to continue to get to work. For Waltham and Newton residents, as an example, all bus service was proposed to be cut to South Station. South Station is a commuting destination for a lot of high paying legal and financial services jobs a.k.a. home owners. Therefore the long term strategy for the T will require integrating these three focuses. The ability to create a vision that addresses the trade offs and provides a regional transit solution goes right to the core of the triple bottom line. We have three more bites at the apple and a solid six months to plan the next quarter of the game.

Melissa Downs is a client oriented, strategic consultant improving employers’ profitability via initiatives such as launching new business lines and continuous business improvements within operations. An experienced program and project management, she utilizes communication skills and critical thinking to build consensus and negotiate priorities. A comprehensive understanding of green issues began as a graduate student and continued as teaching fellow at Harvard University in the Sustainability and Environmental Management program. Melissa is also active in Waltham, MA as the Vice-Chairperson for the Mayor’s Energy Committee charged with meeting the Green Communities Act and outreach with all stakeholders within the city as we move towards a vision of our energy future.

Boston Green Drinks (BGD) is a community of Bostonians interested in sustainability. We bring together people across the ‘green’ spectrum – including energy, food, environment, art, education, health and community services. Our regular gathering takes place on the last Tuesday of every month.

About the BGD Blog

We aim to initiate a conversation about sustainability topics in the Boston area. If you have something relevant to say to our community, we welcome guest blog post pitches. To submit a pitch, e-mail bostongreendrinksdanny [at] gmail [dot] com.